“We Don’t Want the Courts and Jails to Have to be the De Facto Mental Health Service Provider.” 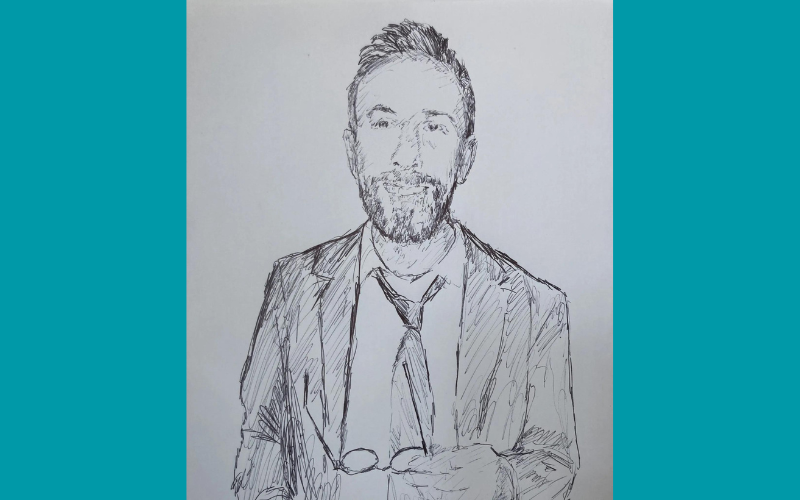 Just before 5:40 pm, a barrage of students hurried through the main door of our classroom. As we sat in our seats observing students pile their things onto their desks and situate themselves in their seats, an icy breeze  came through several windows left ajar for COVID ventilation purposes and penetrated through the fleece layers we wore.

Amidst the clamor of backpacks zipping and unzipping, laptop keyboards clicking, and students’ voices chatting about the day’s dreary weather, Professor Umetsu entered the classroom, followed by the tall frame of a man in a suit and tie and black and white sneakers that offset the formality of his appearance. As he made his way across the displacement of desks and chairs scattered across the room, he quickly found his place at the front and sat down in an office chair.

As he sat down, he exclaimed, “This chair is so rolly, I could probably make it from this end of the classroom to the other with just one push. Wee!”, he exclaimed with jubilation. He turned around, threw his hands into the air, and with another “Wee!”, he rolled back to the other end. Some students shared glances at the man who, to their surprise, greeted them back with a warm smile. From the ends of his mouth curling upwards to the creases by his eyes, the movement under his mask gave the man’s cheerful expression away. His actions seemed to ease some of the tension and nervousness felt by many students in the room, creating a more relaxed environment.

Professor Umetsu then introduced our guest as Judge David Keenan of King County Superior Court, who would be speaking about his personal story as a juvenile defendant in the same court he now presides over. As our team began chatting with him, he pulled out some documents from his briefcase and donned some reading glasses.

Are there times when you think back to your younger self, and question what would have happened if you did not become a judge? Did you have another career path in mind at the time?

DK: I made some notes on this; let me see what I said [laughter from class]. I think I always knew that I wanted to help people in crisis. When I’m giving anybody advice about a career path, I ask them to think about problems they have faced or that someone close to them has faced. What would have helped? What would have kept it from becoming a problem, or kept it from becoming such a big problem? I think when I was younger – well, after I stopped getting arrested – I started thinking that I want to be a social worker because I grew up around a lot of crisis, a lot of trauma; we were housing unstable, we were food unstable.

But then, I think what I realized over time, is I wanted to be in a position where nobody had control over me. I felt like my family was subject to the system so much when I was young, whether it was the criminal legal system or the civil legal system, or just the government. So much that I ended up in law enforcement, then as a lawyer, and then as a judge.

When you were younger, can you recall the event or moment that made you think to yourself that working in the court system was the right career choice for you?

DK: It started with my teenage years, at the age of sixteen, dropping out of high school and working at a local Jack in The Box […] I assumed that when I started working there full-time when I was sixteen, that was going to be my career. I actually interacted a fair amount with law enforcement at Jack in The Box. This is at 85th and Aurora in North Seattle where I grew up, and it was kind of a rough neighborhood by Seattle standards. I saw what the police were doing in terms of intervening in times of crisis, and something clicked for me. I knew I wanted to be on that side and not be on the other side, which is where I had been: in a pair of handcuffs in the back of a police car one too many times. There were definitely a couple of people that took chances on me, and those were pivotal moments.

In your experience as a judge who listens to a large variety of cases, have you noticed a correlation between incarceration and mental illness? If so, how does mental illness affect one’s case?

DK: Yes, a lot of the people that I see in the criminal legal system – I try never to call it the justice system, and it’s not that I don’t believe in justice. I just don’t think that there’s a system I work in that is just cranking out justice on its own. It takes people to get justice out of that system. If you just leave the system on its own, I don’t think it’s designed to produce, necessarily, justice. I think we are working on ways to improve that.

But yes, I do see a lot of individuals struggling with mental illness who end up in my court in cases where they are charged with crimes. I’d say there is a correlation. One of the things I find very hard about mental illness in the court system is, for example, we have something called therapeutic courts. If an addiction was involved with a crime, you might get into drug court where, as part of your sentence, you might get treatment for chemical dependency. Similarly, if mental illness was somehow involved with the crime that you’re charged with, you might get some sort of therapy in mental health court.

I think what’s challenging about that is, we don’t want the courts and jails to have to be the de-facto mental health service provider. Those services, I think, are much better provided in the community. So when we think about ways to have a therapeutic court, it almost sounds like an oxymoron, right? Court is not a great place to get therapy. Although the people in mental health court work really hard and do the best that they can, it is not ideal.

Sometimes people talk about defunding. I don’t use the term ‘defunding’, but I use the term ‘upstream,’ which is the idea that if we’re going to provide mental health services to individuals, it would be better if it was upstreamed in the community before they ever ended up in the criminal legal system to begin with. That’s one of the things that really bothers me about the intersection of mental health and our court system.

What would you say to a judge who would say that we have to punish those who break the law to make sure they don’t do it again?

DK: Well, the data doesn’t support that. Incarcerating somebody doesn’t prevent recidivism. We’re talking about sending somebody away to prison so that they’ll learn their lesson and won’t re-offend. That just generally doesn’t work. I thought a lot about the school to prison pipeline – but I don’t call it the school to prison pipeline, I call it the birth to prison machine – and I think about all the intervention points in that machine. I call it a machine because I think it is set up to produce the outcomes that it does. I think calling it a pipeline makes it sound like it’s an accident, and I don’t think it is.

What I would say to a[nother] judge is, “Let’s look at the intervention points outside of the system before we even have a conversation about the necessity of incarcerating somebody”. When I sentence somebody… I get to see that person’s criminal history all the way back to when they were a juvenile. I look at that list and I think to myself, “Where along the way could we have intervened, so that it never got this far? If they were in foster care, which they often were, what could we have done to better support their foster care experience? If they were in kinship care, how could we have supported their grandparents that were taking care of them? If they had a parent that was incarcerated, how could we have supported the non-incarcerated parent? If they needed mental health care, or housing, or employment, or if they were food insecure, what support could we have given along the way”?

Judge Keenan fills his judicial role with intentionality and compassion, as each nervous person that enters the courtroom carries a similar history of challenges to overcome. Judge Keenan knows firsthand the trauma a young teen can carry with them that is only exacerbated by a legal system where justice is not necessarily a given. His mission as a judge is to actively create a positive impact in the lives of people who were not given the opportunities, support, and guidance they needed before the events that led to their detainment and consequent courtroom visit.

NAMI Seattle offers support, education, and outreach methods to assist communities and individuals through the impact of mental illness. One method of support that NAMI Seattle provides is the ability for schools to request trained presenters to visit their campus through the Ending The Silence program and give an insight into mental illness: their symptoms, warning signs, and how best to support someone who is diagnosed.

This article is a collaborative piece created by a group of University of Washington Bothell School of Business students from Professor Laura Umetsu’s Business Writing course. A special thank you to Tony Nabors and Jasmine Bager for their assistance. Their suggestions, advice, and support were invaluable and instrumental in bringing Judge David Keenan’s interview to life.