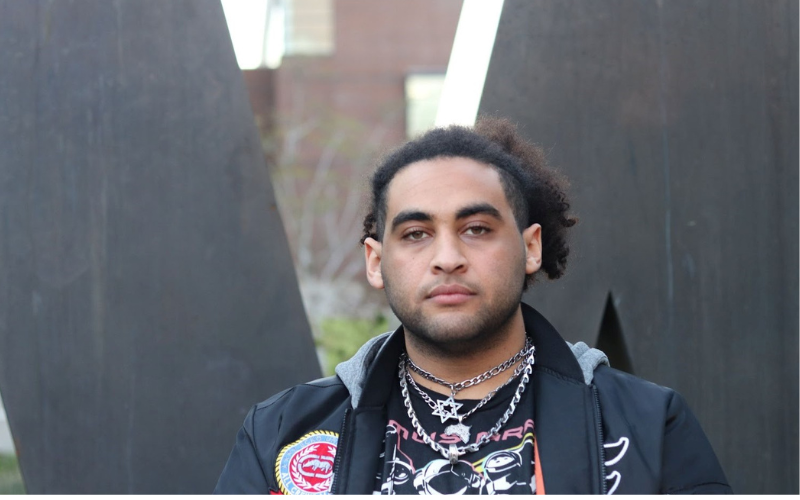 Cameron is the lead singer and guitarist for King Youngblood which is a local alternative rock band. Cameron also founded their Hold Your Crown nonprofit organization, whose mission supports youth mental health.

As we sat tucked in the back corner of our small ground floor classroom, the room began to hush. Only the chirping of birds and the faint conversations between professors and students were audible through the crack of the window. First to arrive in the quiet class was King Youngblood manager Lara Lavi, followed soon by King Youngblood lead singer Cameron Lavi-Jones. Dressed in a leather black bomber jacket and rings on each finger, Cameron’s positive energy radiated throughout the room without saying a word.

Cameron has a passion and an undeniable energy for both art and his community. With music being Cameron’s platform, he’s built a large fan-base here in Seattle, and he uses his musical talent to spread awareness about mental health.

CLJ: “We recognized so many of the things related to mental illness that weren’t getting talked about when we were in high school or middle school or whatever. Even throughout college as well, until things got really dire; when people were in states of mania or in life-threatening situations, either to themselves or other people. We realized that so many of those issues could have been solved if we had normalized talking about these things earlier.

…We had seen too many disaster scenarios, or had too many personal experiences where we didn’t have music or an outlet to help navigate our mental health. We would have been in dark situations ourselves as well. King Youngblood is really big, on the intersection between art and activism.”

​​From this realization, and understanding their own mental health journeys, Cameron and his bandmates formed Hold Your Crown, a nonprofit devoted to eliminating the stigma of mental illness for middle school youth, high schoolers, college students, and young adults. They have performed and spoken to over one hundred high schools in Washington, many in rural areas or with high underserved populations in hopes of reforming views on mental health. Cameron wants to make sure the new generation understands it is always alright to ask for help and they shouldn’t be ashamed to talk about their struggles.

After discussing Hold Your Crown, Cameron, in true entertainer fashion, casually emerged from behind the table at the front of the room and slung his guitar over his arm. He played an acoustic version of his new song “Cried in my Cadillac” for us. Cameron wrote “Cried in my Cadillac” after experiencing a panic attack. The song is an upbeat tune that centers around mental health and the importance of talking through mental anguish as a way of healing. Through the riffs, runs, and high notes, we could feel the roller coasters of emotion expressed through Cameron’s phenomenal vocals. It became apparent through the beautifully sung yet somber words that he had a story of mental health to tell, not just for himself, but for all in the music industry.

The music industry has its own mental health challenges. Artists often use their medium as an outlet to process their emotions and experience. While creating art and building a brand, it can be difficult to find a work-life balance.

It can create an identity crisis, or at least impact my own mental health, navigating where Cameron starts and where the King Youngblood is. Navigating the space in between is where all the powerful work is actually done. Yeah, I am wearing all black, but simultaneously, even though I have to be on, I am still talking to you guys like me, because I am! It’s finding different ways to blend the two.

Being an artist also means getting used to getting told no and constantly being told no and still pushing forward, which is hard. You have to be yourself, but at the same time have the gall and audacity to believe that even if you get told 1000 times, no, that that one time, you get told yes, it’s worthwhile.”

Cameron talked about putting what he cares about into his music, organization, and business. It is clear that he, his bandmates and team value vulnerability, openness, authenticity, and activism. They are willing to be honest about how they are doing and what they need to take care of their mental health.

Thanks to Cameron Lavi-Jones and his manager Lara Lavi for sharing their valuable time with us. Thanks also to our UW Bothell School of Business classmates Jason Kalka, Khoa Tran, Ilya Tsemekhman, Youchul “Greg” Shin, and Ben Williams, consultant Ashley Fontaine and Professor Laura Umetsu for their assistance in editing and feedback.