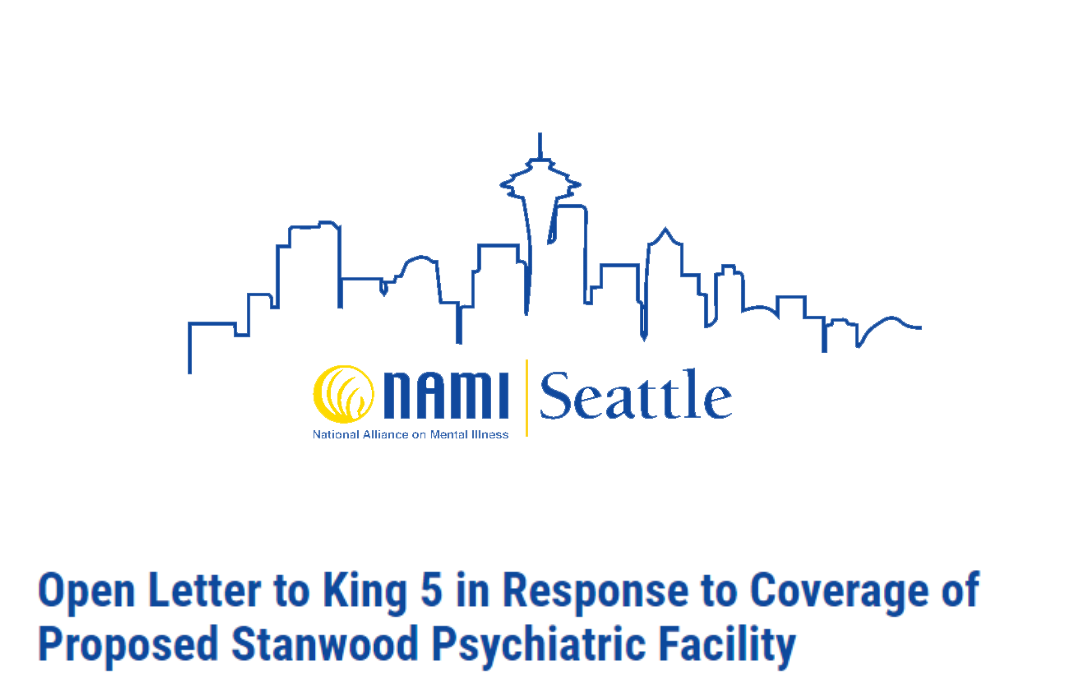 This letter was sent by NAMI Washington alliance affiliates to King 5 news on March 16, 2022.

Update: as of March 17, 2022, the video of this story is no longer available, and the corresponding news article has been updated to include a paragraph from the below letter.

We are writing on behalf of the National Alliance on Mental Illness of Washington and our affiliate offices located in Washington State. Our organization was deeply disappointed upon seeing KING 5’s story “Proposed Stanwood psychiatric facility drawing pushback from neighbors,” which mischaracterizes people with mental illness as violent and unable to participate in society. This representation is factually incorrect, creates fear and mistrust in the community, and encourages discrimination against those affected by mental health conditions.

As an alliance, we strongly object to KING 5’s use of stigmatizing and dehumanizing language such as “dangerously mentally ill,” as well as your decision to only feature interviews with community members who oppose the facility. Such broad generalization about mental illness is blatantly discriminatory. The members of our community know all too well the dangers of such discrimination, regularly attesting to the mistreatment they’ve endured both within and outside of the medical system.

This stigmatizing language is not only harmful, it is inaccurate. For those who pose a danger to themselves or others and have a criminal charge, treatment is addressed by a forensic navigator at Western and Eastern State hospitals. These cases are for people experiencing acute psychosis, prolonged mania, and other severe symptoms that require extensive treatment to participate in their own defense at trial or to be moved to a less restrictive care setting. Civil commitments for serious mental illness can start at a locked facility, and as recovery progresses they move gradually to less restrictive care and treatment.

Despite public perception, many individuals who have been committed to our state hospitals live productive and fulfilling lives. We believe framing those who have been hospitalized as “dangerous” while neglecting to provide the facts about hospitalization is irresponsible reporting. Additionally, we consider highlighting first-person accounts and perspectives solely from those who lack firsthand knowledge or experience with mental illness to be unfair and imbalanced.

We urge KING 5 to consider how your reporting affects the many individuals in our community who have experienced inpatient stays, and how this contributes to the stigma that keeps people from getting the help they need in the first place. The reason that psychiatric facilities have been moved closer to the community is because connection to family and friends, both in and out of hospital, has been empirically proven to improve recovery rates and life outcomes. When news outlets sensationalize the basic needs of those who simply wish to restore their lives and live with dignity and agency the result is too often that vulnerable individuals are denied quality healthcare due to misperceptions and discriminatory attitudes of others. NAMI Seattle expects better from our local news organizations.

As a trusted local news source, KING 5 holds the power to shape community perceptions. We ask that King 5 issue a formal correction and remove this piece from your website.

Co-Chairs, Board of Directors