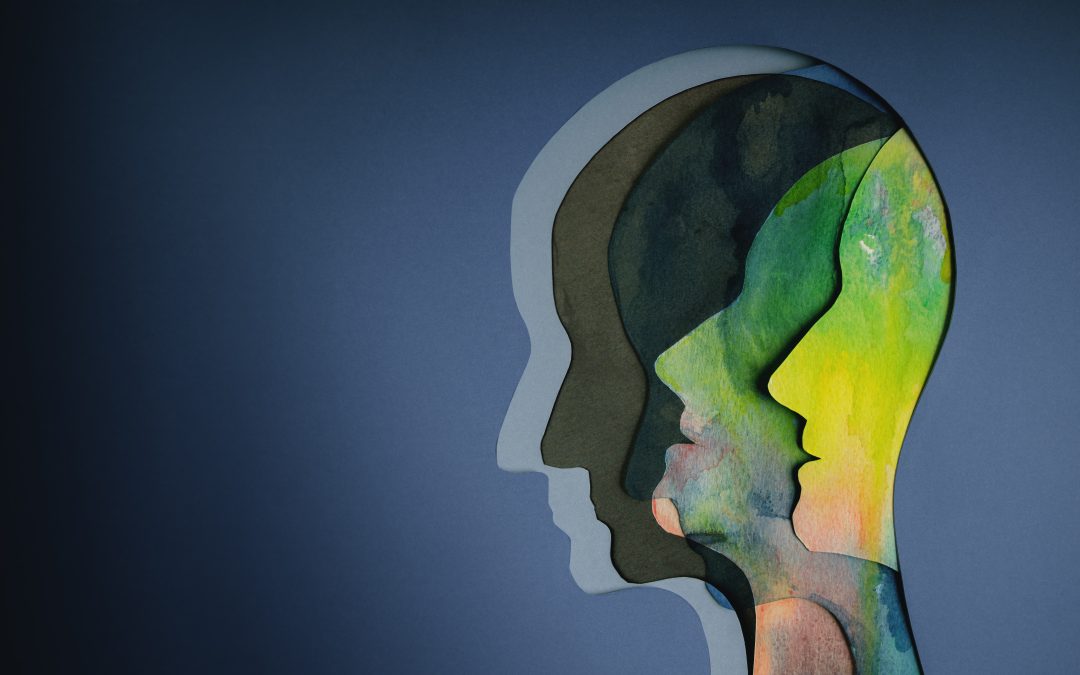 I woke up to the blaring alarm sound of my iPhone, on the morning of the interview at 10:25 am. Still exhausted after 5 meager hours of sleep, I quickly logged on to my laptop, realizing the interview had already started and I was running late. Over my computer screen, Ginger was in her bright red art-inspired room, smiling and talking enthusiastically with her firm yet agreeable voice.

Ginger, with blonde bangs hanging down on top of her blue eyes like stockings hanging over a fireplace, spoke with a smile that lit the room and energy so invigorating, it hit me stronger than the cup of coffee I had in my hand. Never in a million years would I have guessed that Ginger had such a difficult past living with mental health challenges. Ginger spoke with a precise meaning behind her words, alert to the core and prepared for each and every question I asked her.

Once my coffee set in, Ginger told us that she was born in New York, while her childhood years were spent in Alexandria, Virginia. Driven by a passion for art, she decided to study art history at Vassar and worked in D.C. at the Corchran Gallery before moving to Seattle to work at the Seattle Art Museum. NAMI Seattle board member, she serves on their philanthropy and the public policy Committees. In her free time, she works with the Museum with Women in the Arts in D.C. trying to establish a Northwest Connection and writing women back into art history.

What is it like to live with bipolar? If I know someone who has bipolar, how can I be there for them?

GV: My bipolar diagnosis came at age 70. When I turned 70, I had a mental breakdown. I was unable to get out of bed. I had no energy. None of my normal interest in things. My friends and family… I kind of forget they existed. It took about 3 months to get in with a good psychiatrist, who diagnosed me with Bipolar 2 and got me on some medication and another 3 months to stabilize.

What were those episodes of ups and downs and being stuck in bed?

How did you first become aware of the stigma [regarding mental health]?

GV: My father’s sister [had schizophrenia]. And it caused a lot of friction in the family because it was during the 30s and 40s. There was a lot more stigma. It wasn’t talked about at all and there was no real treatment.

How do generations differ in terms of stigma against seeking help?

GV: I’m very open about it. I think NAMI is what got me talking about this. Working with NAMI I’ve gotten more open to talking about it. I feel really strongly that we have to start treating this as if it’s just as serious or at times more serious than a broken arm or leg. I’m trying to get my friends (of my age) to do the same thing, to talk openly about their friends and family about mental health. But it’s a long haul because it’s not the norms (generational). It takes a certain amount of courage to talk about it because people do not want to talk about it.

Decades ago in particular, where they [individuals] lost touch with reality with schizophrenia…It was treated as kind of an embarrassment rather than a disease that needs treatment, and people didn’t talk about it. It was a stigma. But it was a very real sort of thing in families to try to delay seeking professional aid out of fear of being stigmatized by others. This stigma can also be internalized, making it more difficult to seek help. I remember in my own family, they didn’t really know what to do with my aunt who lived with schizophrenia.

What advice would you give to youth today, given your experience with mental

GV: A friend of mine in another organization told me that his husband was talking about suicide. I emailed back and told him, “Whenever someone talks about this, you need to take it really seriously. It’s immensely upsetting since there are so many bright, wonderfully gifted, and skilled people with emotional health issues. There are suicide hotlines like the ones on the NAMI Seattle webpage here.

Talk about it. Talk about it…with mental illness, people need support and encouragement to get treatment.

What would you tell your younger self if you could go back and speak to yourself about mental health?

GV: I would tell those with depression like I had, […]  to get some help. See a psychiatrist and there are a lot of good medications for depression. There is hope for recovery. You can have a fulfilling and functional life when you get help and support.

Ginger, along with others at NAMI and in the mental health field, worked hard the last few years to get a bill passed in Washington to institute a 988 crisis line. Ginger says, “For situations where someone is having a mental health emergency… there is now a 988 number… So instead of police cars and sirens and badges, someone like a mental health care worker or a social worker will show up in a normal car with a t-shirt and khaki pants so it’s less scary.” As of March 17th, 2021, the bill passed, bringing 988 into reality.

Ginger is excited to continue working with the other NAMI Seattle board members to expand support options for persons affected by mental illness. She also hopes to continue sharing her stories with individuals she encounters in order to continue her efforts to reduce the stigma on mental health so that it is treated with no more stigma than “if you broke an arm”. If you encounter Ginger at NAMI Seattle virtual events, be sure to say hello!

For more information on how to contribute like Ginger to end stigma, see NAMI Seattle’s donation and volunteer pages. To urge your representatives to fund important mental health initiatives like the 988 phone number, we encourage you to join NAMI Seattle for virtual lobby day in February. Special thanks to Laura Umetsu, Jasmine Bager and Tony Nabors  for their editing and contributions to our blog piece.