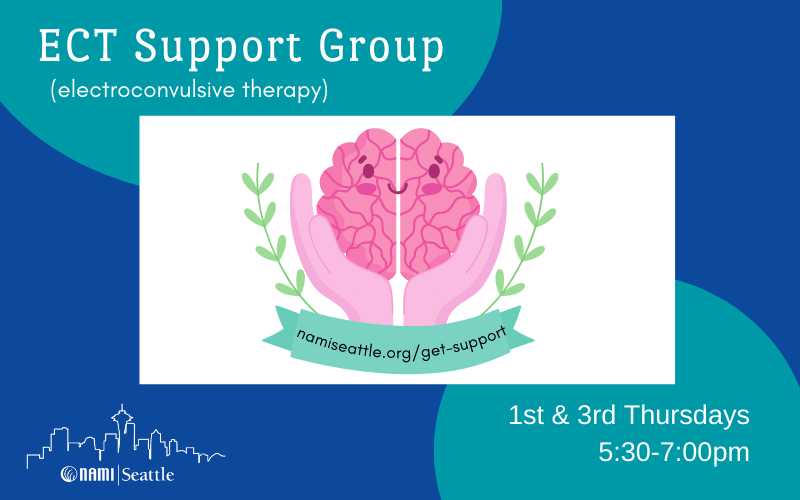 Did you know sometimes medication and therapy aren’t able to relieve symptoms of depression or other mental health conditions? In these situations, there is still hope and other options. Brain stimulation therapies, like electroconvulsive therapy (ECT), might be considered in these cases.

ECT treatment is non-invasive and is performed under general anesthesia. Precise electric currents are passed through the brain resulting in a controlled seizure that affects neurons and brain chemicals to quickly improve certain mental health symptoms.

Treatment with ECT occurs in a series, usually a couple of times a week. After completing an initial series, some people receive occasional “maintenance ECT” treatments. Side effects can include headaches, muscle soreness, nausea, short-term memory loss (may occur during treatment and tends to be brief), and longer-term memory loss (rarely permanent).

What is ECT used for?

ECT is most often used as treatment for severe depression, depression with psychosis that has not responded to medication, and treatment resistant bipolar disorder. If you are experiencing one of these conditions, you are not alone.

Hope is possible because recovery is possible. “Between 70 and 90% of individuals who receive ECT treatment report an improvement in their depression” (NAMI).

Learn more about ECT to help break the stigma: https://www.nami.org/About-Mental-Illness/Treatments/ECT-TMS-and-Other-Brain-Stimulation-Therapies

Stigma around ECT is prevalent even in the mental health community due to misinformation, lack of availability, and concerns around side effects. ECT treatment is very different than it was decades ago when it was first developed. Poor media representation adds to the stigma around ECT. Together we can share information about ECT and share stories of hope and recovery.

To help break the stigma around ECT and to provide a supportive place for those who have experienced ECT treatment or who are thinking about ECT for themselves, NAMI Seattle partners with Swedish Medical Center to offer an ECT Support Group. You are not alone in NAMI.

Our ECT (electroconvulsive therapy) Support Group meets the first and third Thursday of every month, currently on Zoom, from 5:30pm-7:00pm.  All NAMI Seattle’s support groups are free, drop-in and led by trained peer volunteers. Peer-led support groups are proven to be effective and to reduce re-hospitalization and reduce days in inpatient care (Mental Health America).

People who attend our ECT Support Group were kind enough to anonymously share their thoughts on ECT and the support group.

A few members reflected on ECT.

“Going through ECT, it makes me feel like a freak. When I come to this group so many people are going through the same thing.” Another member added, “I’m not completely alone.”

One support group member looked back on how they were feeling after ECT, “I’ve been getting more introverted since ECT, I got scared talking with people maybe because of cognitive impairment. Being in this group, talking with people who have done ECT, we’re going through the same thing and there’s nothing to suppress.”

Another support group member reflected on the stigma around ECT.

“Even with huge stigma around ECT, makes me feel freer to know so many other people getting ECT normal. Makes me feel that I’m not completely alone – others are going through same thing.”

Others discussed how the support group has been helpful in their recovery journey.

“It’s helpful to hear how people are in different places (of recovery) and it helps me find my place (in the world volunteering and in recovery.”

Another attendee enlightened, “This group feeds my soul.”

One person expressed how the support group has impacted them, “I feel less alone, more like I belong and I’m a normal human being. It’s important to be able to relate, hear from people at different points in experience with ECT, depression. Especially in relation to jobs, volunteering, home life, outpatient/inpatient transition. It helps me find my place.”

Sharing their story with us, an ECT Support Group member exudes appreciation for finding community.

“I received ECT treatments starting two years ago.  I continued them for a year and a half and have been without them now for 6 months.  I was very pleased to learn that a support group had been formed for ECT.  I had never met anyone else going through this procedure and was very happy to have the opportunity to learn of other’s experiences and share with those contemplating starting the treatment.

I found the camaraderie with others in the support group to be most helpful.  Given the seriousness of the treatments and what brought us to determining to undergo them, it helped me to not feel alone and to hear of other’s perspectives and experiences.  I also felt helpful sharing my experiences with those who were thinking of starting the treatments but hadn’t yet made a decision.

Since I have not had a treatment in over six months, it was interesting to hear how others were doing who had also ceased the treatments.  I, myself, was relieved of my extreme depression and anxiety after undergoing ECT treatments.  Not to say, I still suffer from some of the symptoms, but not at all to the extent that I underwent two years ago!

The leaders of our support group are most welcoming and go through the proper procedures in facilitating the sessions.  I have come to consider the other participants as “zoom friends” and look forward to seeing them when I can.  I am hopeful the support groups remains for a long time!”

You are not alone. The ECT Support Group is a great place to find support and to answer your questions if you are considering ECT for yourself.

You can learn more about NAMI Seattle’s other support groups at http://namiseattle.org/get-support/#support_groups