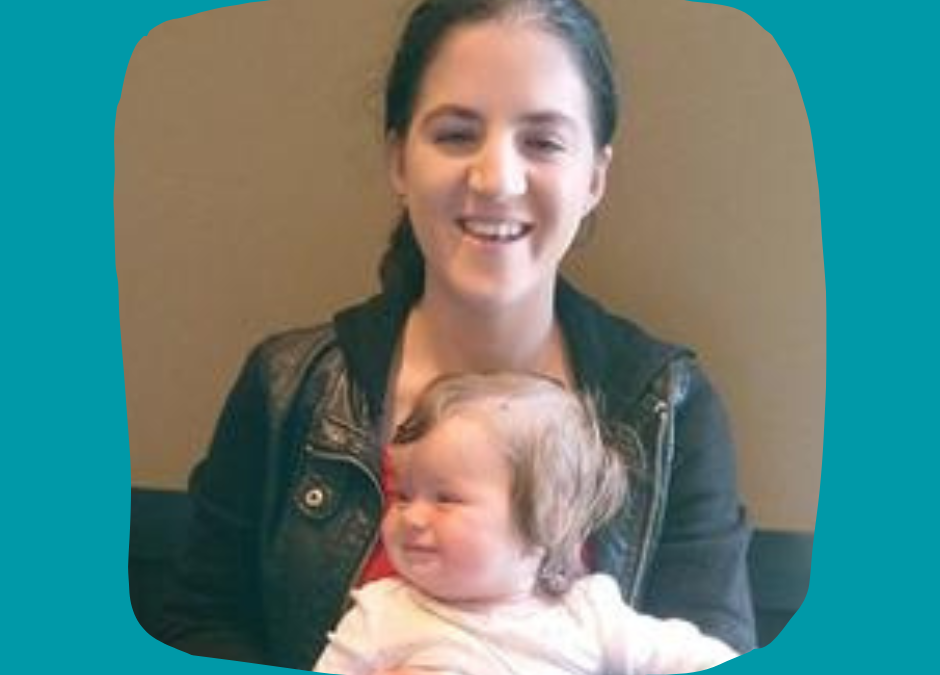 We are students in Laura Umetsu’s Business Writing class doing a business communications internship project with NAMI Seattle to interview their board members. A few weeks ago, we had the pleasure of talking to Dr. Margaret Diddams (DMD). As Board President, she plays a big role in NAMI Seattle’s vision to “address the unmet mental health needs within our community.”

DMD agreed to meet us at a Starbucks. We arrived early to our scheduled meeting with her. The tables there must have been only a square foot in area – a bit too intimate for an interview with someone we never met. We rearranged them to create our own little interview nook in the back.

We were not prepared for a secondary, yet adorable, interviewee – her newborn daughter Isabel Diddams. Isabel was asleep in her carrier, but she still commanded our attention. More rearrangements to our nook were made to accommodate this pleasant surprise. We knew we would have to make an effort to stay focused after the arrival of this sleepy addition to our afternoon discussion. We spent some time talking about her child before we jumped into our interview.

NAMI’s motto is “You Are Not Alone.” My time speaking with DMD demonstrated that the motto has a firmly rooted presence in her life. The major ideology (among many) that came across in our time speaking was that connection is important. Even lifesaving. “It takes just one connection to save a life” – she said from one of her own life experiences. She manages living with bipolar disorder discovered after adolescence.

While NAMI’s functions are far too numerous and detailed to discuss here, the term “advocacy” generally refers to legislative and social adaptation. I wanted to know what the day-to-day tasks of a mental health advocate were.

What does the average workday in NAMI look like for you?

DMD: I am the board president. There two main functions of NAMI: public advocacy and support groups. We teach people who have mental illness to tell their stories. [Public advocacy] provides funding for housing. Support groups create connection.

Board governance is big picture stuff. How we get to the future [of] economic and social equity. How we can create better work environments [for those] with mental illness.

Public awareness isn’t important only for those living without a mental illness. It’s also important for those with mental illnesses but are unaware of it. How does someone know to seek help if they do not know that help is available? How does someone know how they feel isn’t normal because it’s the only normal they’ve known? Things were things we had wondered to ourselves beforehand.

What advice would you give to someone who is suffering from a mental illness, but is unaware of it?

DMD: It’s challenging because there’s so many kinds of experiences that people have. First thing I would do is sit quietly and listen. I think knowing that you’re not alone, that there are others [is essential]. It’s possible because we are silent that the person sitting next to you is struggling with mental illness as well. It’s okay to be broken.

Encourage people to be brave. Be willing to share your own stories. I remember the first time I shared, before city council. After sharing, I started feeling better and bolder, [knowing] my experience was accepted and normal. There is value in the individual telling the story. It helps others.

On the topic of being unaware of mental illness, we wanted to know if this prominent mental health advocate could have been unaware of the issue at a point in her life.

Was there ever a time in your life where you were unaware of mental illness?

DMD: When I was fourteen, I was really struggling with depression. I was cornered by my parents. They [wanted me to accept treatment]. I did not accept anything. Looking back, I can think about. I did not accept it. Later in life, I suffered trauma [(domestic abuse)], and it took a while to get out of [that depression]. I found out that [a couple close to me] met at a mental hospital. I didn’t know that for twenty years. That helped me seek help.

According to the NAMI website, about “1 in 25 adults in the U.S. (11.2 million) experiences a serious mental illness.” It’s not a stretch to say that we all know somebody who suffers from a mental illness. Most people are affected, if only indirectly, by mental illnesses.

Is there any benefit for people without a mental illness to know about NAMI, and other organizations like it?

DMD: There is when we think about the lack of treatment does to the rest of the community. There are so many impacts. 70% of homeless in Seattle have mental illness. Jail is the largest provider of mental health support. Society is paying for it. It costs more to keep people in jail rather than treating them outside of jail.

NAMI Seattle’s website revealed to me that board members are volunteers. We had wondered to ourselves what her motivation could be to continue her work bringing awareness to mental illness.

What could drive someone to continue dedicating their time to volunteer work?

DMD: I think about how difficult it is to access mental health care. When I was feeling suicidal.  My friend helped me. We went to [Harborview Medical Center]. We told them.  They said, “here’s an appointment three months out.” It was totally dysfunctional. I attempted suicide. I had a friend who helped me. A lot of people don’t have anyone. That connection saved me.

We have a health care system that helps with physical symptoms. We don’t talk about it. People struggle for so long, but they don’t have to… they [can] have normal lives with connections.

Most people are directly or indirectly impacted by the effects of mental illness, and everyone is affected by the economic effects of it. It’s in everyone’s best interests for the issue of public illness to be known, and the stigma of it to be removed. We certainly appreciate her efforts in raising awareness, and I know that countless individuals will be directly and indirectly benefited from her work.

However, there are ways that anyone can help: