Camp United We Stand: An Interview with Board Members Judith Levenson and Bill Leon 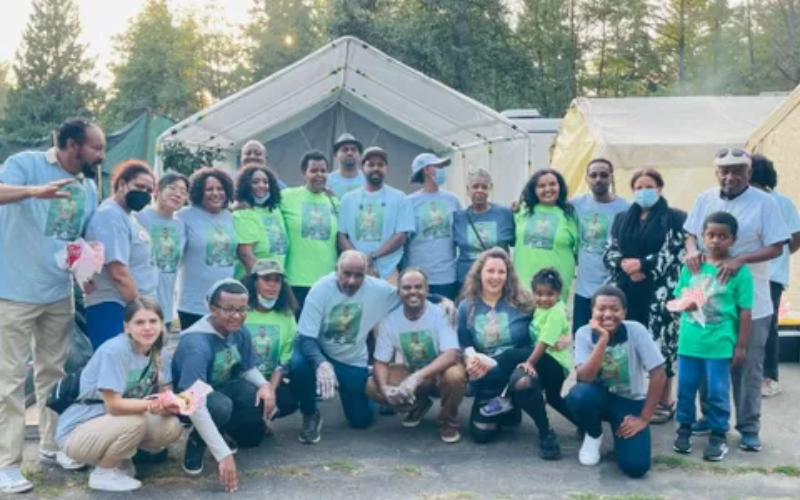 “We’re providing something to help them make it to the next day.”

On a dark Thursday night, our class trickled silently into our classroom on the bottom floor of the UW1 building. Our group shifted itself to an optimal position for conducting our virtual interview with two board members of Camp United We Stand.

Camp United We Stand is a 501 (C) 3 non-profit organization whose mission is to provide safe shelter for homeless individuals and families in need.

“We work toward this mission by operating a transient homeless encampment in the northern Seattle/Shoreline area for the provision of shelter, the residents’ daily needs and to facilitate their transition to independent living.”- https://campunitedwestand-tentcity.org/

We had the honor to speak with Bill Leon and Judith Levenson, volunteer board members of Camp United We Stand. Bill is a program evaluator by trade. He works with organizations of all kinds, especially non-profits, to help them measure the success of their programs. Judith is a licensed psychotherapist who worked in a public health clinic for 12 years. Many of her patients were on disability for mental health reasons, and had at some point in their lives been homeless.

As they joined our class via Zoom, we began our interview. What followed was an enlightening conversation. Bill and Judith showed a seemingly rare combination of genuine passion and practical knowledge about the intersections between homelessness and mental health.

How has your work with Camp United We Stand affected your own mental health?

Bill: You know, it has kind of made me more aware, I guess, of what other people go through. It challenges one in terms of being helpful and empathetic, and at the same time having to deal with issues that require that we force people to leave the camp because they use drugs or got into fights, so it’s an interesting challenge. I think it’s been more positive than negative in that sense for me.

Judith: I would agree with Bill. I have to say that in general working with people, with severe mental health problems, and also just with the confluence of problems that our campers have, it makes you more appreciative of what you have, and any degree of stability that you have. It has just enhanced an everyday awareness of that. And I do think that’s one thing that happens to people when they become involved in this kind of activity.

Bill: Yeah, it makes you grateful for what you have you know, when it’s night and it’s raining and the wind is blowing and I’m snuggled in my bed and I’m like, ‘Oh wow, I’m really grateful for that’.

I should point out too that not everyone in the camp has severe mental illness by any means. You know certain people have certain issues, and probably everybody’s dealing a little bit with depression and anxiety. When you’re in that situation, whether you were depressed before you became homeless, certainly once you are, I imagine that’s kind of something you deal with constantly.

Judith: It’s a very stressful way to live. Being homeless is not viable for humans. And so I think the goal always has to be ultimately to find a more permanent shelter. It’s really very difficult for our species.

Based on your experiences, how does homelessness affect people with mental illness?

Bill: Why do we have such a huge problem? There are two big reasons. First, Ronald Reagan and the administrations that followed. They de-funded subsidized housing in this country to the tune of tens of billions of dollars. That really decreased the amount of affordable housing available to anyone. The second big thing was, they defunded mental health support… So, the community provided mental health support, meaning we’re going to have clinics where people can go instead of housing them. We defunded a lot of support for poor people and people with mental illness in this country, and that has really exacerbated what you see on the streets every day.

How does the community assist one another in the frame of mental illness?

Judith: Well, you know, it’s actually very impressive how the campers help each other. They’re actually very knowledgeable about all these things, far more than your typical person on the street. They often will be the ones who become aware of someone’s problems. First, because they’re living in close quarters, and they have rules to follow, and they’re living in a stressful situation, so they can be very helpful to each other. They can also stir each other up, because there are a lot of personality clashes that we encounter. A lot of what we do as a board often is to help them negotiate some of the tensions that arise.

On alternative systems to jail

Bill: The biggest mental institutions in most states are the prisons and jails, because people act enough to where they commit crimes, and then they’re incarcerated, and they’re not getting the treatment they need in prison, either. It’s not a solution. Now there is another system in place that doesn’t solve that problem, totally, but the cities of Bothell, Kenmore, Kirkland, Lake Forest Park, and Shoreline have pulled together to hire social workers who can be called out instead of or with police when somebody is presenting mental illness, they can bring in somebody who can help that person reconnect with their counselor if they have one, help them navigate to services rather than go to the emergency room or go to jail, which are both very expensive as well. So, it’s actually cheaper for these communities to invest in this kind of support than it is to keep doing the status quo, just arresting people or letting them go to the emergency room. Those are very expensive solutions for society, and for our tax dollars, too.

What message would you like to give to those who are apprehensive about Camp United We Stand?

Bill: We’re providing food, clothing, and a sense of community, and a way for people to get a little respite from the issues that they’re dealing with, you know, it is what it is. It’s not perfect, you know. People are going to come and go. We can’t serve everyone, right. There are twenty-five to thirty-five people at a time. We’re providing something to help them make it to the next day.

Shoreline Cooperative Preschool , which shares a parking lot with Camp United WE Stand, has released the following statement regarding the camp:

“From time to time, SCP has the privilege of welcoming Camp United We Stand into the vicinity of our school, when Shoreline Free Methodist Church extends space in our shared parking lot to the camp. In our region, we live in community with unsheltered neighbors, and we are grateful to Camp United We Stand for providing “a community designed by the homeless for the homeless in transition.” This tent encampment provides safe, reliable shelter and we are honored to support their mission and share our collective resources through donation drives based on their needs list. As educators, we value the opportunity to help support developmentally appropriate and compassionate conversations with young children about our unhoused neighbors in the camp and more broadly in our city.” – Elisabeth Heftel, Director, Shoreline Cooperative Preschool

With the long PNW winter rapidly approaching, Camp United We Stand needs your help to keep serving its community.  For more information, or to get into contact with Camp United We Stand, please visit their website at https://campunitedwestand-tentcity.org/needs-list.

This interview was edited and shortened for conciseness and clarity.

Thank you to Ashley Fontaine, Jennifer Sanchez, and Kayla Harris for your time, effort, and help creating this article.