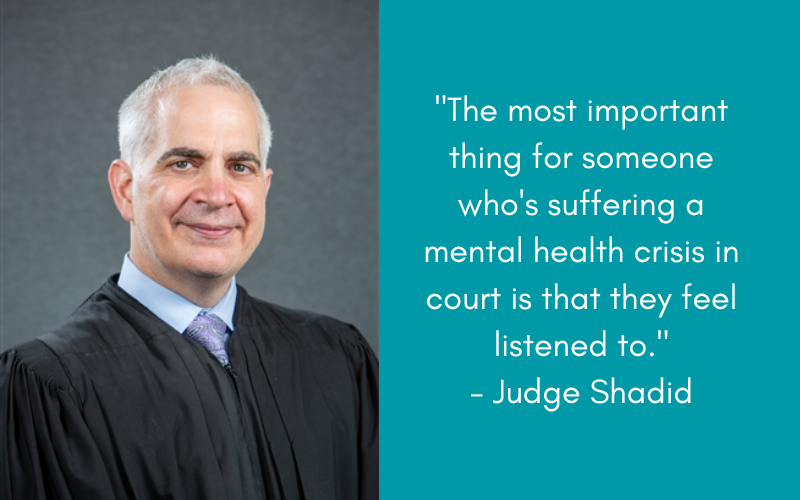 On a cold Tuesday evening, students began filing into the classroom with their winter gear on. Sounds of jackets unzipping, chairs moving, and groups talking filled the atmosphere. What once was a silent classroom became an environment full of eager learners. The big screen in front of us showcased Judge Damon Shadid wearing a crisp blue suit, matching blue tie, and a welcoming smile. As the room began to quiet down and people began to settle in, we welcomed Judge Shadid and thanked him for joining us. Judge Shadid’s punctuality and personability were evident throughout the interview.

Judge Shadid has been a member of the Seattle Municipal Court since 2014. Since then, he has accomplished many things while on the bench to improve Seattle’s Mental Health Court and its participation in helping those in need of mental health resources. Judge Shadid revitalized Seattle’s Mental Health Court. He also created a new Community Court that allows people to be connected with services and rehabilitation instead of being prosecuted and put in jail.

Judge Shadid’s desire to help people began in his early years, when he worked as a social justice advocate and community organizer for Somali women while attending law school. Shadid first practiced as an immigration lawyer and criminal defense attorney after graduation, recognizing the need to represent noncitizen defendants. While working toward justice in the legal system, he saw the flaws of the structure. He believed that people needed help and support rather than jail time. This prompted a career shift from working as a lawyer to serving as a judge – a decision he would never regret. By serving on the mental health court, Judge Shadid has made it his mission to restore faith and justice in the legal system.

What circumstances would you look for from a person when recommending Mental Health Court?

Judge Shadid: The beauty of the system that we have is that we have hired a third-party clinician to come in and make that assessment so that my own personal biases, unconscious biases or conscious biases, won’t come into play for who gets in the Mental Health Court. Instead, we actually have a degree professional who will do that diagnosis. Because she doesn’t work for the court, she also has access to mental health records that I do not, and that I should not have access to. And so she can, for instance, see how many times the person has been civilly committed. She can see what medications have been tried in the past by the State. She can see a whole bunch of things that I can’t see and that I shouldn’t see because everything I consider in court has to be public record. You wouldn’t want to introduce that kind of sensitive personal information in court. So instead, our clinician does that work for us, and then presents the people to me in court.

If someone gets sent to Mental Health Court, what is the procedure like from arraignment to sentencing?

Judge Shadid: The first thing we have to do in Mental Health Court is to figure out whether or not they are able to be prosecuted at all, and we do that by having them evaluated. So even before arraignment, a lot of people can’t even be arraigned because they can’t even understand what it means to plead not guilty. If they decide to opt in the mental health court, the first thing we do is we get them arraigned and then we hook them up with our court clinician and our court clinician is an independent third party who comes in and assesses the person, and determines whether or not they have a qualifying diagnosis. We allow the person to spend a few weeks to a few months working with the clinician and getting connected with services in the community. Then, the person can decide for themselves whether or not they like it and want to opt in fully, which means taking a plea or if they want to go through Mainstream court. At any time, they can decide you know what this isn’t for me and I want to take my chances with the trial, or with the plea bargain.

What is your thought process when interacting with someone who has limited capacity to understanding the proceedings against them?

Judge Shadid: The most important thing for someone who’s suffering a mental health crisis in court is that they feel listened to. So, I take a lot of time with those cases, and I just be quiet, and I let the person speak, and I thank them for any information they give me. I ask follow up questions, even if they seem irrelevant to the lawyers on the court. And just try to make them feel heard.

What do you think we need to improve on? If anything in our current criminal legal system, as it applies to individuals with a mental health condition.

Judge Shadid: Well, in general, my judicial philosophy is that at the misdemeanor level, we should be fully engaged in rehabilitation and not punishment. So, you know, this is, people should be given a chance to improve their lives and improve themselves when they exit the criminal legal system. In general, the misdemeanor criminal legal system should be focused on getting people connected to services and getting them out of the system, not creating a system where poor people are loaded up with convictions, lose their housing, can’t get student loans…that’s not what we should be about. The misdemeanor system I really believe that we just have a misguided system that has an over reliance on the jail, and we need to stop that.

You mentioned Community Court, and you indicated that it’s different from Mental Health Court. How so?

Judge Shadid: We had a lot of little property crimes coming through Mental Health Court before I created the new Community Court. Mental Health Court isn’t the right place for somebody who steals a pair of socks, I mean it’s questionable whether the criminal legal system is appropriate for those kinds of cases. So, when they come through, we hand those for Community Court.

Community Court is for much lower-level crimes. The way that I structured it is that anyone who participates in Mental Health and Community Court is released from jail, period. It is a one hundred percent release program.

Instead of jail time, what are the measures that you go through in Community Court?

Judge Shadid: I structure Community Court, very specifically to try to address some of the big problems I saw in the criminal legal system. There’s three levels of Community Court: the first level is education, where people just learn about what’s available to them, and then we help connect them if they want to be connected. The second level is connection, which means we give them the education. But then we expect them to make a service connection in the community. Usually, that involves filling out a housing questionnaire, getting a substance use evaluation, mental health evaluation. And the third level is engagement, where we expect people to engage with the services that they are connected with for thirty days. And then there’s also a community service or a life skills class that accompanies that. So what we’re trying to do is very quickly pick up the people, connect them, get them out of the system and so it’s two weeks, thirty days or forty-five days.

What are some of the good things that you’ve seen Mental Health Court accomplish in defendants’ lives?

Judge Shadid: I mean, if you could see the transformative change that a lot of these people go through it really it can make you cry. I’ve had tears in my eyes on multiple occasions. The people will just amaze you and all they needed was personal attention and connection to the services, and someone to sort of hold their hand through the process. And you know, Mental Health Court, our graduates, I mean, they have a stunning success rate. And usually when there is a new criminal law violation, it’s for a very obvious reason they relapse, or they go off their meds and they, you know they have trouble. And you know frankly, those people, we welcome them back into the court and say, “okay, let’s figure out what went wrong there, and let’s see if we can fix this”. I’ve been really touched by graduations, and Mental Health Court is by far my favorite thing that I do as a judge.

NAMI Seattle offers a variety of mental health resources and programs to support you and your loved ones.

This collaborative article has been written by University of Washington Bothell students of Professor Laura Umetsu’s Business Writing class. NAMI Seattle has been partnering with Umetsu to bring awareness to the positive impacts and important resources NAMI provides. Special thanks to Ashley Fontaine, and Jennifer Sanchez Tejada  for providing support for this piece.

This interview has been edited and condensed for clarity.